2018 Barbershopper of the Year:  Donavan Skaggs 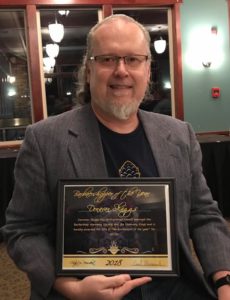 Not a singer, Donavan first encountered the Harmony Kings as the hired videographer for the 2014 annual show, “Barbershop Through The Ages.”  The rest of his family attended one of his later Harmony Kings gigs when his daughter was cast as an actor in the annual show, “Love Letters.”  Shortly after, his 13-year-old son, Rodger, became the chorus’ newest (and youngest) baritone.

Donavan was Rodger’s ride to rehearsals, but wouldn’t get up on the risers.  He instead spent rehearsals helping out with chorus marketing, website maintenance, show poster artwork, audio consulting, and eventually ended up on the board as the first “community board member” in the society.

He has since recorded video and audio for other BHS and SAI choruses, quartets, shows and events, EVG District Division II Convention support, and videography, photography and marketing for Harmony Explosion youth music camp.  His most recent projects with the chorus was recording, producing and releasing the chorus’ first ever album, “Federal Way Favorites” and a complete ground-up rebuild of the chorus’ online communication system and website.

David Foss 2017 Barbershopper of the Year 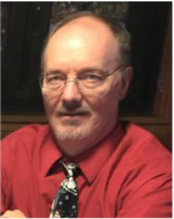 David Foss named the 2017 Harmony Kings Barbershopper of the Year!We are proud to recognize David for his hard work and dedication behind the scenes. For the last 7 years, David has worked in multiple activities to insure the quality of Harmony Kings annual shows. David has written the last three shows, and is working on his fourth show for 2018.
​
His first show was “Love Letters” in 2015, as the chorus explored the ins and outs of relationships, mistakes, and misunderstandings. In 2016 he had the chorus “Reminiscing” about a retired Barbershopper and is Grandson, and in 2017 we celebrated “America” complete with a tribute to our Armed Services and patriotic music. David is busy working on “The Weather Girl” for May 2018.This year, when David saw a need for a music librarian, he jumped in with both feet and supervised the library, including our recent move to Journey Church. Again, when a need arose, David volunteered to co-chair the 2018 Show team, planning our first performance at the Federal Way Performing Arts and Events Center.To help fill out his time with Harmony Kings, David serves as the Baritone section leader. He also is a founding member of Harmony Knights Quartet. Harmony Knights is Harmony Kings’ most active quartet, having represented us at District Convention multiple times. For fun David also sings with Bellevue’s Northwest Sound as a dual member.The Harmony Kings have been awarding a Barbershopper of the Year Award for over 55 years! What a wonderful way to say thank you to our hard-working members.Congratulation to David Foss.

Barbershopper of the Year 2016: Greg Kronlund 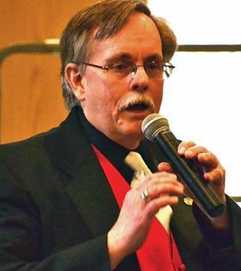 At the Harmony Kings annual Christmas Party/Installation, Greg Kronlund was named “Barbershopper of the Year for 2016!”

Greg’s singing days go all the way back to third grade where he sang his first solo. Singing has always been a part of his life. His first “quartet” was a folk group called “The Trav’lers“, that actually went on tour for 29 days.

For Greg’s real job, he has been a disc jockey; worked for the NASCAR circuit in the Tri Cities, WA, and is currently working for Pierce College as a Program Assistant of PierceWorks! A Human Development/Career Transition Course.

It was back in the Tri cities where Greg sang with the Columbia River Chordsmen. Greg was also a member of the Rainier Valley Harmonizers and the Puyallup Valley Harmonizers prior to coming to the Harmony Kings. And we are so glad he came our way!!

Greg has been instrumental in many facets of our organization. He has taken on the role of President for two years. And he is able and willing to do it again for a third year. Greg has a way of getting things done. He does a fantastic job of setting goals for our organization and actually having them come to fruition.

So it is with great honor and appreciation that we have named Greg Kronlund as our 2016 Barbershopper of the Year!!

Barbershopper of the Year 2015: Lanny Gleason 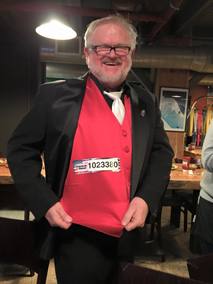 Lanny Gleason was  named the 2015 Harmony Kings Barbershopper Of The Year!

We are proud to recognize Lanny for his hard work and dedication behind the scenes. Recently he has held the position of Communications VP and Chorus Manager. Lanny has also held the positions of membership and chapter development.  Mid-way through 2015 he took over the duties of Chapter Secretary.

As our Chorus Manager Lanny successfully arranged and organized over 30 Community Performances in 2015; including the chorus audition for America’s Got Talent.  Balancing these activates while holding a board position at the same time is an amazing feat, and Lanny handles his duties with tremendous enthusiasm.

A member since 2005, Lanny is a valuable member of the Federal Way Chapter.  Lanny is always ready to jump up and help; he is one of our “un-sung” heroes. This is Lanny’s second BOTY award! We truly appreciate all the things Lanny Gleason does to make Chapter life more enjoyable.

Barbershopper of the Year 2014: Don Hoem 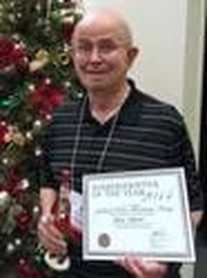 Don Hoem was named the 2014 Harmony Kings Barbershopper Of The Year.

Don was being recognized for the hard work and dedication he showed to our chapter behind the scenes, and for his continuous board activities as both Treasurer and Assistant Treasurer.

A member since 2007, Don is a valuable member of the Federal Way Chapter. When something needs to be done, Don is always ready and willing to jump up and help; he is one of our “un-sung” heroes. We truly appreciate all the things Don does to make Chapter life more enjoyable.

Harmony Kings Barbershopper Of The Year – All Recipients